CamperScanner finds you the very best deals on campervan hire in Lyon.

If you're planning a campervan tour of France or Europe, chance are the you'll be including the wonderful city of Lyon in your itinerary. Whether you're starting or ending your motorhome travels in Lyon, or just passing through, you'll find plenty of useful information here about Lyon for campervan travellers. Enjoy!

Quick Navigation
How far are campervan depots from Lyon airport?
When are the best times to visit Lyon?
Places to Visit in and around Lyon
7 Tips for Visitors to Lyon
What are the best ways to get around Lyon?
Where Can You Camp in Lyon?
What Campervan Brands are Available in Lyon?

Those who love France argue as to which is the cooler city: Lyon or Paris.

Paris may seem the obvious answer, but let’s just say that Lyon may have a few points in its favour.

Certainly, if you wish to avoid the socks and sandal wearing tourists mobbing the Mona Lisa, or taking selfies at the Eiffel Tower, you’ll want to head to Lyon. The city is over 2,000 years old and will give you a real taste of the country, without the hassle and prices of Paris. And while Lyon may be France’s third largest city, it has managed to hold onto a small town feel that enchants visitors.

While there is no shortage of things to do, your Lyon list will include only a few must-sees.

Start by searching out all the city has to offer in gourmet food as what you’ll find in Lyon could rival almost any table in Paris. Your taste buds will dance and you won’t have to pay shocking prices.

Service is friendly and without the attitude you may find in other cities. Lyon is simply more laid back – you will love its lack of ego.

Explore the distinctive hilltop Basilica of Notre-Dame de Fourvière; it’s in the appropriately-named Old Town (which will make you feel like you have stepped back in time). Stay in Old Town a little longer and make sure you don’t miss the ruins of the oldest Roman theatre in France.

When shopping, you’ll want to save room in your luggage for your finds from the remarkable shops of the Presqu’île Quarter. Lyon also has plenty of museums to interest you, among them the Museum of Gallo-Roman Civilisation, Musee de Beaux Arts and the Centre d’Histoire de la Resistance et de la Deportation.

Climb one of the two major hills for excellent vantage points of the city’s unique architecture. Pick a park to have a picnic after filling your basket with goodies from one of the local markets.

A trip to Lyon is a relaxing experience, while seeing the city by campervan lets you avoid pricey hotel accommodation. And instead of paying restaurant prices, you can create your own culinary masterpieces at your campsite, made with delectable groceries you’ve purchased yourself.

How far are campervan depots from Lyon airport?

Lyon’s airport is relatively small and manageable. Depending on which rental company you select, the rental depot will either be very close to the airport or as much as a 35 minute taxi ride away. Allow between 25€-65€ for taxi fare or, better still, inquire with your agency as to the exact fare to get there, and be sure to ask if they offer a pick-up service from the terminal. 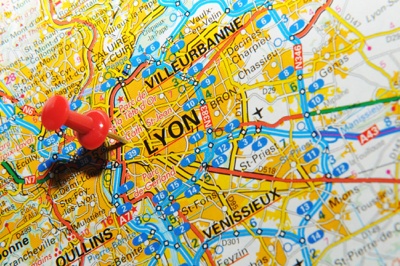 When are the best times to visit Lyon?

You can experience all four seasons in this lovely city with an annual average temperature of 22°C.

January is by far the coldest month with temperatures falling as low as 3°C so pack warm clothing.

If you want to really escape the crowds then opt to visit during a shoulder season —autumn can be quite delightful. From September to November, temperatures drop with highs going from 23°C to just 10°C. Pack well, however, and your visit will be a comfortable one.

Summer (June-August) is the peak season to head here with highs a hot 23°C-26°C during the day and a comfortable 13°C-15°C at night making for great outdoor sleeping weather. Note, however, that camp sites in France close by the end of October, and do not to reopen until April at the earliest. Some may close as early as August so call ahead and never assume that there will be a spot available.

Places to Visit in and around Lyon

Yes, France is known for super-stylish design and independent fashion flair. While there are chain stores here where you may get some cheap finds, if you love fashion then the many unique boutiques along the Rue de la République will get your heart beating faster. And don’t miss the Rue du Boeuf in the Old Town. 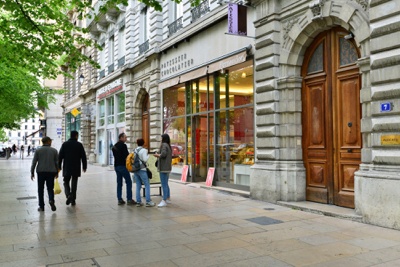 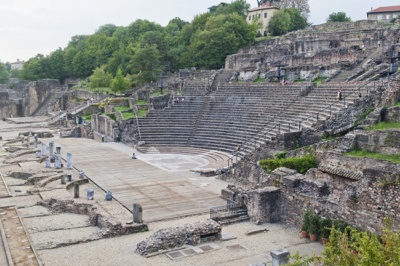 Lyon, once the Roman capital of Gaul, is very proud of its history. The Gallo-Roman is just a short walk from the Notre-Dame de Fourvière Basilica (another must-see); a museum where you can explore the city’s fascinating history at your leisure. The Gallo-Roman is also a wonderful vantage point from which to view two ancient Roman theatres; the Fourvière and smaller Odeon. At one time, the Fourvière entertained audiences as large as 10,000 people; the Odeon as many as 3,000.

The Musée des Beaux-Arts houses European paintings from the Middle Ages to the 20th Century with heavy-hitter names such as Degas, Cézanne and Renoir in its permanent collection. Be sure to experience the Gothic masonry of the Cathédrale St-Jean which took over 300 years to build and where you still see its 600- year-old astronomical clock. 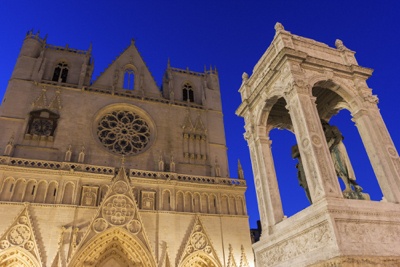 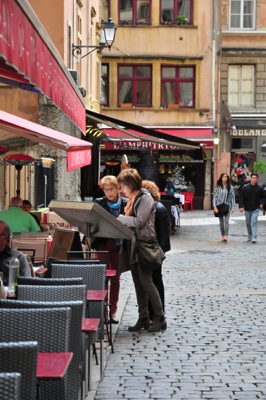 If you don’t mind eating at stand-up tables then take the time to sample food from the stalls at Les Halles de Lyon Paul Bocuse. Go there and you’ll also want to allow time to sample the chocolate at Bernachon and Chocolat! (after a visit to the Bahadourian delicatessen).

In Lyon, don’t stop at the grocery store. Instead, check out the small gourmet shops that specialise in local and regional foods, along with the best of international fare. Don’t forget to check out their wine lists too – you may want to stock up on a case or two to take with you.

Consumed too many calories in Lyon? Luckily another of the city’s many charms is its lanes and streets, easy to walk and straight out of a storybook. Put on some comfortable shoes and strike out early to get stunning photos in the calm before the city streets come to life. Duck into one of the many outdoor cafés for a coffee or a glass of wine and people watch while you give your feet a well-earned rest. 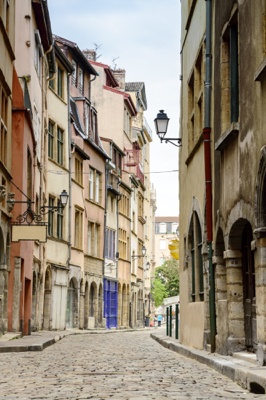 To Market, to Market

Lyon’s markets are not to be missed. Of special note is the Marché de l’artisanat et des métiers d’art on the banks of the Saône river where many of the best local painters, photographers and potters sell their wares on Sunday mornings. You’ll also find unique clothing for sale; choose one of the stunning scarves on sale for around 5€ for a pleasant memory of the city that won’t weigh down your luggage. These scarves also make great presents for friends and family back home. 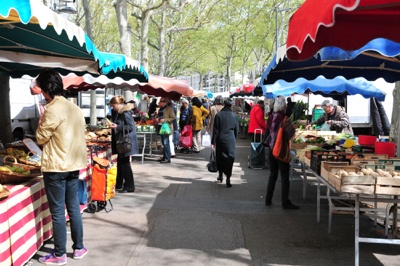 7 Tips for Visitors to Lyon

What are the best ways to get around Lyon?

Public transport Buses, trams, a metro and two railway lines are operated by TCL and can whisk you around the city at very reasonable rates. However, the best way to get around is slowly, by walking or by riding a bicycle. Bicycles are cheap to rent and the first 30 minutes are free! 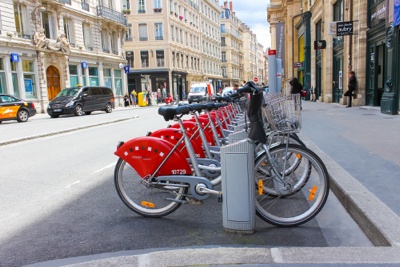 Where Can You Camp in Lyon?

Consider yourself warned. Trying to drive a campervan into major French cities will cause headaches, provoking profanities and arguments even amongst the most cordial couples.

The narrow and winding streets, confusing regulations and expensive car parks were not meant for tourists in large vehicles. In addition, most large cities in this country ban camping within city limits. Try to park overnight and you can land yourself in hot water with the police.

A city like Lyon is best visited in the early autumn, late spring or during the summer months – all times when nearby campervan parks will welcome your business and public transport can get you into the city. While you can’t camp within Lyon itself, these nearby campervan parks are a great place to park for the night:

What Campervan Brands are Available in Lyon?

Motorhome rental brands in Lyon include:

The Definitive Guide to Campervan Rental in France

Ensuring your camper van tour of France is the very best...

Everything you need to know for a motorhome road trip in France...